Neither Natural nor Synthetic (1/2) 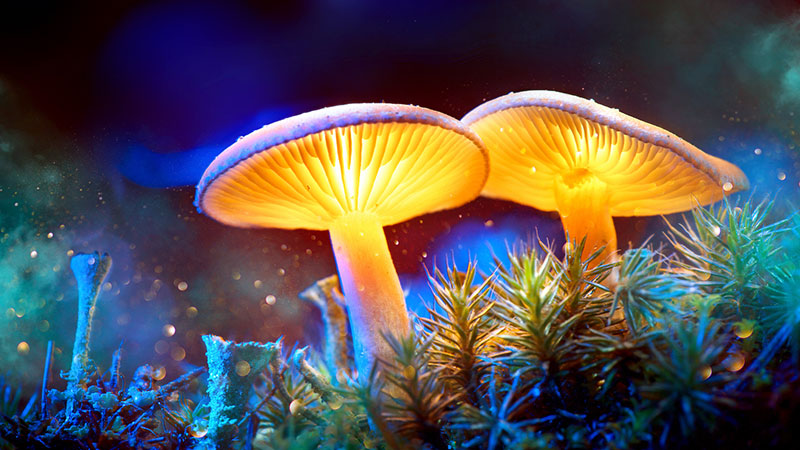 In drug lore, the term “synthetic” typically serves to differentiate a category of drugs from “natural” ones. Natural (or organic) drugs are derived from ingredients that have undergone little or no processing, like cannabis or hallucinogenic mushrooms, while synthetic drugs refer primarily to substances such as LSD or MDMA which need to be synthesized in a lab.

Is it better to use the so-called natural psychedelics, or synthetic ones? This is hotly debated today. The organic faction invokes closeness to nature, traditions, purity and the legal aspect. The synthetic clan counters that synthesized molecules are purer, thus making it possible to be more precise, to be more scientific, to push the limits. I do not think there is a single correct answer to this debate. It depends on the type of experience sought, the context and a host of other factors. To each his own. I have personally experimented with both and cannot bring myself to systematically choose one camp over the other, as there are positives to both sides.

Do You Eat Organic?

Like penicillin, organic psychedelics have a wide range of effects and act more broadly on the person who consumes them. Latin American communities who consume ayahuasca, and those in Africa who imbibe ibogaine, may create a ceremony around the substance, which assures that participants are able to take away something concrete that can be incorporated in their everyday lives. They have long-standing traditions in which a leader, usually a shaman or a sorcerer, ensures a safe ceremonial journey for all participants. The psychic realms associated with these plants, mushrooms or cacti are inhabited by billions of conscious beings, so it is easy to find a guide in the form of animal or plant spirits, subtle entities, etc.

These plants, mushrooms and cacti are less dangerous for beginners. I am not passing judgment here on the quality of the experience. For example, whether peyote or LSD, focus should be on safety and comfort when it comes time to integrate revelations and obtain moral support. By focusing early research on organic compounds beginners will be able to share their impressions and revelations with their entourage more easily. They are usually legal and easy to find. A study of the traditions of indigenous cultures offers a good idea on what to expect during the experiment and how to prepare.

There is no room for frivolity or inconsequence during this type of experimentation. A responsible psychonaut should be familiar with the substance he wants to experiment with and its effects. It should not endanger his physical or mental health, nor that of others. An attitude whose hallmarks are prudence, discretion, respect and wisdom is a prerequisite if one is to grow from such experiences. Not all mushrooms are edible, many contain poisons. Though it has been used for ages, even Amanita muscaria can be toxic if not prepared properly. Datura, Castaneda’s Devil’s Weed, is a powerful hallucinogenic that produces vivid visions for three days and can be poisonous if improperly dosed.

Since these psychedelics have been used for thousands of years, it is relatively easy – and this ease is evidence of harmony – to find guides, information on the subject and support in the community. They can also be grown by the user to better understand the plant’s growth process, gain insight and tame it. If in doubt, it is better to abstain than to buy a pill from a stranger who couldn’t care less about your health. To not be sure what will happen after ingesting because we do not know exactly what we put in our bodies is a direct path to the hell of a bad trip complete with a possible trip to the hospital. To use legal drugs is to eliminate the paranoia that comes with the inability to be certain that what is bought is really what we want to try. This is an important condition when starting out because if the first experiments go well, we are likely to be motivated to continue and to discuss it with friends.

Once LSD and MDMA are available legally, I will be the first to recommend them. In the meantime, why not let yourself be guided by the age-old knowledge of ethnobotany? Nature provides us with a wonderfully rich, subtle food, and we would be ill-advised to do without, considering its effect is to make us stronger, more conscious, more beautiful… when ingested with wisdom and intelligence.

The nasty taste and toxicity of many organic substances repel many psychonauts. For example, it is common to vomit when consuming large quantities of peyote, ayahuasca or ibogaine, but this is normally integrated in the ceremony as a form of purification/liberation. Many Westerners may be cooled off by this aspect of the experience. The same goes for the taste of San Pedro, which is certainly no incentive to consume it. A firm and disciplined attitude is called for, and a willingness to do anything to have visions provides the courage to ingest consciously. Indigenous cultures claim that the initial discomfort when consuming Mescalito (the mescale spirit found in the peyote cactus) is its favorite trick to ward off those not ready for the experience. But the desire to experience the absolute among explorers like me surpasses the apprehension of physical discomfort associated with the experience, and often enhances the effect. The richness of the experience largely offsets the momentary discomfort.

The consumption of morning glory and Hawaiian baby woodrose seeds cause a persistent nausea and pervasive malaise. Physical discomfort is due to other organic compounds present in the plant, but it is possible to incorporate these aspects in the experience. This type of old-school experimentation is not as quick and easy as it may seem at first, but with patience and devotion we can have surprising results.

Inspired by Castaneda, I consumed high doses of San Pedro which I purchased legally in a shop in Montreal. I introduced myself to ethnobotany and experienced with ayahuasca (which I cooked myself), the seeds of woodrose and morning glory, Salvia divinorum, San Pedro, datura and various dream herbs. It is wise to experiment safely, to be pragmatic and mature in our research, while daring to be bold and push the limits.

Woodrose seeds contain psychotropic alkaloids: ergine (or LSA), which is closely related to LSD, isoergine and ergometrine. For a psychedelic effect, one swallows 5 to 10 seeds. Physical discomfort is inherent in the ingestion of woodrose seeds (dizziness, nausea and fatigue), and in my case resulted in anxiety and emotional distress which I would gladly have done without. I focused intently on my third eye to shift my consciousness to my subtle body and finally experienced the visual beauty of LSA and a metaphysical well-being, but the physical discomfort hovered over the experience. I tried it once and do not regret it. The revelations led to the emergence of new ideas and a new perspective on reality. The physical discomfort was intense enough, however, to discourage me from going further in this direction. I was overwhelmed with visions of magnificent pastel-colored fractals accompanied by a note of continuous music, or rather a tone that lasted 24 hours. My outdated and superficial reality construction collapsed. I had just read Robert Anton Wilson’s Cosmic Trigger, as well, a cult book powerful enough in its own right to trigger a psychedelic experience. When the fabric of reality is torn like this you lose your footing for a few moments, only to be more stable than ever when you regain your balance.

It is best to plan experiments well and buy enough of a substance to undergo several sessions with the same batch to be able to compare pragmatically the different experiences or increase the dose gradually to find one’s limit. I always intelligently planned my experiments so as not to injure myself, for an elixir of life can easily be poison if imbibed in too large quantities. It is good in this sense to remain pragmatic, to draw lessons from shamans, to understand how they live and to learn to use these herbs befittingly.

Inspired by Carlos Castaneda, I studied datura a few years ago. I grew the plant from seeds sourced in the city. A high-dose datura experience normally requires 200 to 300 seeds, so I began by ingesting ten seeds, almost without any effect; then I tried twenty, with similar results; with thirty I began to have a sore throat and I felt drunk. I went to bed and it was not until the next morning that I had some visions, except that I was also overcome by a negative feeling. I decided to end my experiment because I did not feel the plant favorable towards me at that time.

Many will be surprised that I mention tobacco in this chapter. It is sacred to several native and indigenous cultures and wild tobacco is strong enough to be used as a psychedelic. Some shamans go into a trance after smoking a large quantity of it. Tobacco is even smoked to begin and close psychedelic ceremonies in Latin America where the smoke symbolically bridges our world and spirit’s.

I took great pleasure in studying tobacco. It grows like a weed and produces beautiful bell-shaped flowers. I bought seeds and cultivated two kinds of tobacco, blond (Nicotiana tobacum) and wild (Nicotiana rustica), and for the first time I was able to taste real tobacco, savoring every puff. The taste and the effect is very different from that of commercial cigarettes. So few people have tasted tobacco with no additives, reflecting our society’s relationship with food today. We should relearn to enjoy the moment. Smoking is not dangerous if we invest the act with consciousness, for when an experience gives us a sense of well-being, the negative effect of the smoke is offset by the beneficial aspects such as an elevation towards psychic levels, activation of the psyche and satisfaction.

Tobacco is psychoactive like marijuana, but too few people know that. Tobacco smokers should stop and think before passing judgment on marijuana smokers, because they, too, alter their consciousness. The term “psychoactive” indicates that this substance activates the psyche. It is similar to the hypnagogic state, an intermediate state of consciousness between waking and sleeping, which occurs during the first phase of slumber and during which transparent scenes and beings begin to appear. Visions are not vivid enough yet to take over consciousness, and we’re still not asleep enough for the waking mind to shut off. A similar phenomenon may be experienced when smoking marijuana. Simply by closing one’s eyes and being attentive to psychic sensations, one can sense dynamic activity buzzing around one’s ears. There is always so much activity at this level, but few of us pay attention. By being attentive at this psychic level, we sense when people think of us and we intuitively guess their state of being, or what they want to tell us. It is then possible to discuss with them telepathically. But our materialistic society pays too much attention to external stimuli by obliterating our inner universe to which we should also pay attention. So reinstate tobacco and marijuana’s pedigree; they both have great medicinal properties.