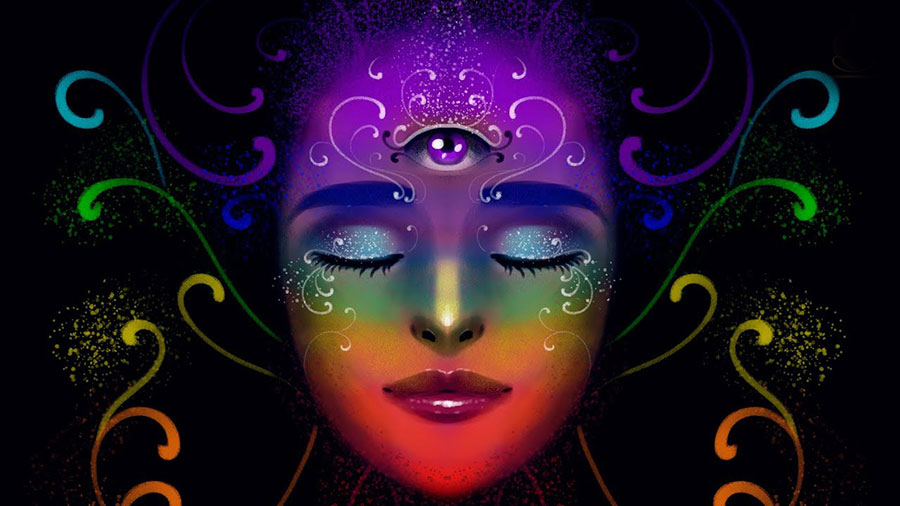 I experienced more intropathic experiences with other women and with deities such as Krishna, Quetzalcoatl and the Grand Jovialist. By juxtaposing my being with my person, I open a channel and contact the most subtle parts of my body that connect with those of others. Being centered is essential, because if you don’t know where the limits are you risk getting lost in the other. Even during the most intimate moments of communion I have always kept my personality and let myself be to allow the experience to unfold harmoniously. Since I no longer identify myself with my person, I am not afraid of being trapped in the body of another.

To “imprint” is to expand; is to enrich our experience of new multidimensional holographic sensations. We come out evolved, enriched by the feeling that we are not separate from anything. New qualities, perceptions and powers manifest.

When I was thirty-two, I fell in love so intensely with of a young woman that our symbiosis lasted two weeks. Her psychological maturity and knowledge about this type of experience were barely developed, however, and this provoked violent disturbances in our respective lives.

During this period I had a psychedelic experience in which I had a vision of us in a simultaneously occurring parallel life. I tried to explain but it was unintelligible to her. She thought I was trying to brainwash her like a malicious guru who manipulates his devotees for his own benefit. The situation spun out of control and we were swept away by a powerful force that propelled us full speed into a torrent of emotions and new sensations. My psychedelic session coincided with her breaking up with her boyfriend and I will always remember her terrified look when she imagined that it was me who had pushed her to do it. We were then faced with synchronicities that raged around us and were impossible to rationalize. Terrorized by the paranormal aspect of the situation, she disappeared, though she did not stop thinking about me. I felt her vibrate inside me with remarkable clarity. We were one, intertwined like twins. I thought constantly about her as well – obsessed, intoxicated, overwhelmed by this incredibly powerful experience that I had not seen coming. I lived my reality through her, carried away in a light trance, a state of ecstasy and controlled madness mixed with an overwhelming desire to be with her… in her… at every moment. I lost myself in her completely. As soon as I stopped thinking about her, she would start, and it would not stop.

After two weeks of this scorching intensity, even as I was feeling she might lose her mind, her father intervened in a dream and separated us with a great cry of rage. This allowed me to restore my balance and stop thinking about her. I managed somehow to recover my own identity, but with new qualities and a new sensitivity, very feminine and young. I try now not to think about her so as not to agitate her, but I cannot help but notice when she thinks of me. I close my eyes, let her talk to me and try to understand why she is thinking about me. I may even do automatic writing when I want more clarity. I obtained some surprising revelations this way. My intuition is usually confirmed by the fact that I meet her in the street the very same day. But it is sometimes painful to have such strong powers because they can drive people you love away, as much as bring them closer.

I experienced a divine symbiosis in December 2008, and it was one of the most profound experiences of my life. While writing Absolute Happiness, my closeness with André Moreau put me in such a state of openness that I suddenly became the Grand Jovialist, that is to say an archetypal presence resembling a cosmic committee of the happiest beings imaginable, but mainly tinted by André Moreau’s personality. I had time to download several of the archetype’s programs and metaprograms, and the last chapter of Absolute Happiness was directly inspired by this extraordinary experience. I rendered the experience beneficial by not forgetting myself, otherwise I could have been sucked up by a black hole and and reduced to mush. But at this point I knew what was happening in me and I drew rich material from it for my work. I never lose sight of myself, and that is my secret. I am my only master and I let everything enrich me without ever drowning in it.

Intropathy facilitates telepathy and makes it more vivid. In contrast to technological communication, telepathy is non-local and does not require us to move or use a telephone. In this respect technology is merely a bridge to be crossed without dallying. Still, thanks to the internet, I managed to fall in love with women I met only virtually, but to compensate for our physical distance we connected psychically. One of them lived in Mauritius, and though she lived on the other side of the planet, the connection was as clear as crystal. When I woke it was time for her to go to bed and I felt it when she dreamed of me. By concentrating, I was able to dovetail psychically with her and take part in her dreams. And if I dreamed of her I knew she was thinking of me. I could read her mind with ease. Non-locality permits all. We live in privileged times for telepathic individuals, because technology facilitates non-local connections and activates synchronicities exponentially. It can become a crutch, however, if we do not quickly learn not to depend on it to communicate with others.

Siddhis should not prevent us from concentrating on the essential. I came in contact with a very psychic but wounded woman whose suffering was the result of her hyper-developed empathy. Our physical relationship was limited to a few emails, but psychically she appeared to me on the very first day in a dream and asked me specific questions. I sensed she was about to commit suicide – her suffering, or that of others, was that devastating to her. So we met a few times subtly, in dreams, and during an experiment with MDMA. During this session, alone at home, I intervened directly with her. I offered to share her pain and asked her to stay on Earth in the body in which she felt so battered. This was my first conscious remote intervention experience. I offered her my light as an ointment, had her taste my ecstasy, and shared my strength with her. We never met physically, everything happened at the subtle level, yet I know that what happened was real. Today still, the memory of this event is so alive in me that I remember every detail, every feeling. MDMA gave me the velocity and empathy needed to carry out this intervention, like shamans who use entheogens to access knowledge and help heal those who come to them. Psychedelics increase my vibration and my sensitivity – I only need to remain deliberately conscious to have immanent knowledge burst forth suddenly out of nowhere.

Psychokinesis (or telekinesis) is the metaphysical ability to set in motion (kinesis) a physical object with the mind (psycho). Psychokinesis therefore allows one to remotely (tele) move objects and act directly on physical objects with the mind. I experienced it with Ayahuaska. As a general rule, to foster telepathy it is good to see the person with whom you want to talk. Lying on my bed, in full psychedelic trance, I decided first to try it with my cat. I visualized him and asked him to meet me on the bed. At that moment, I heard the sound of a small object falling on the floor in the kitchen. I did not think twice about it and sought instead to locate my cat. After a few minutes, I gave up on the idea that he was coming, and began to think of something else. I went into the kitchen later, and, to my surprise, I found that what had fallen was a small magnetic orange plastic cat that had been on the door of the fridge for at least a year. It fell when I tried visualizing my cat, also orange. Strange coincidence!

When we possess powerful psychic powers, it can cause some pretty amazing telekinetic events. It is not uncommon during periods of stress or major change that light bulbs will burn out, or mirrors and frames will drop off the walls. One day I was talking with a friend on the phone and my computer turned on by itself. I did not pay much attention and continued my work. That evening, when she brought up the same subject, I shared with her what had happened during our afternoon discussion. At that moment, the computer turned on by itself again, almost as if it wanted to show me that what had happened earlier that afternoon was no accident. The following day, it was the television screen that suddenly went to black. I had to switch it off and back on again for the picture to return to normal. Moreover, that same weekend two light bulbs burned out in the house.

This type of situation was commonplace to Carl Jung. He even concluded that these phenomena were related to a person’s individuation process – to pivotal moments in which the psyche reorganizes itself at a time of great change. Jung describes what happened during one of his meetings with Freud when they broached this topic in Vienna on March 25, 1909: “While Freud continued on with his idea, I had a strange feeling. I felt like my diaphragm was white hot like an incandescent arch. And at that moment, just to our right in the library, there was a bang so loud that we both got up, frightened, fearing it might crumble on us. I said to Freud: ‘That’s an example of what is called a catalytic phenomenon.’ ‘Come on,’ he cried, ‘it’s a joke.’  ‘It isn’t one,’ I replied. ‘You are wrong, professor. And to prove it, I predict there will be another equally violent detonation in a moment.’ Naturally, I had barely uttered these words when we once again heard the same explosion. I still do not know what gave me this certainty. But I knew, beyond any doubt, that the noise would reproduce. Freud looked at me speechless. I do not know what was going on in his mind, or what his look meant.”