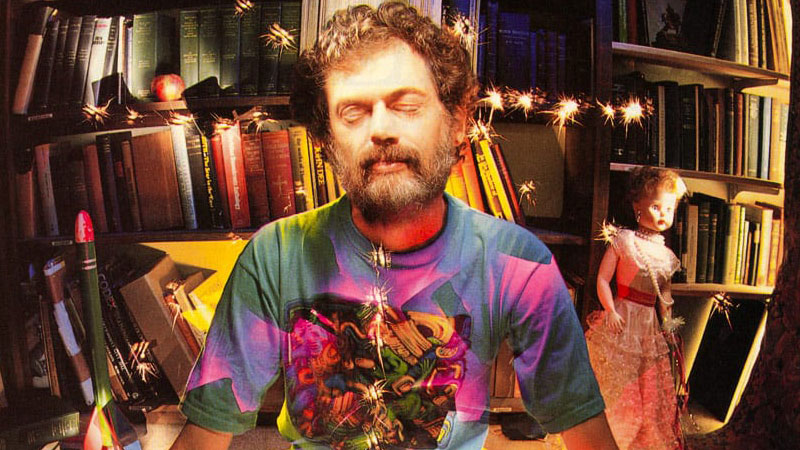 Although not the main contributors to my thinking, the following Intelligence Agents were also, in their own way, important in my development.

John C. Lilly (1915-2001) was a physician, psychotherapist and writer from the American West Coast. He is best known as a pioneer in the study of consciousness, which he studied with his own tools: the flotation tank, communication with dolphins and psychedelic drugs. He was an important member of the California counter-culture in the late sixties and early seventies.

John Lilly helped me understand my vast inner worlds and how to explore them with intelligence and discipline. I remain deeply affected by his pragmatic and obsessive personality. I would like to work with ketamine and the isolation tank one day, like he did. With his keen intelligence and audacity, Lilly pushed his research to previously unexplored heights. He dove bravely into himself and brought back wisdom and practical knowledge of the subtle realms of consciousness and made them accessible to all.

His interactions with the ECCO (Earth Coincidence Control Office) helped me deal with similar personal experiences that would have frightened me, had they not been made familiar by Lilly. Some laugh at me when I talk about my path and aliens, others think I am crazy or I that I am laughing at them. But it is healthy to have these types of experiences when experimenting with one’s consciousness. “When given freedom from external exchanges and transactions, the isolated-constrained ego (or self or personality) has sources of new information from within.”

Lilly’s research with dolphins demonstrates that this planet is already home to living beings with intelligence superior to that of humans. Before attempting to contact extraterrestrial civilizations we should pay attention to mammals of equal or superior intelligence to ours such as whales, dolphins and elephants. Their brains are larger than ours and they possess a language and a culture all their own. Humans saturate the planet with ultrasound, unaware that they affect the lives of these mammals who use these frequencies to communicate.

Carlos Castaneda (1925-1998) was an American anthropologist known for his books chronicling his alleged experiences under the tutelage of his mentor, a Yaqui Indian by the name of Don Juan Matus. He was an anthropology student at the UCLA in 1960 when he met Juan Matus, an Indian claiming to be a Yaqui, and he became his student. His work catalogs his experiences and lessons gleaned from this relationship, whose reality is still hotly debated.

The Teachings of Don Juan was a revelation of unprecedented violence. I had never even imagined how powerful psychedelics experiences could be, nor the extent of the shaman’s knowledge which provides access to parallel realities. After reading this book I had one wish: to try peyote and experience the separate reality. I discovered I could legally purchase San Pedro (a cousin of peyote) in Montreal. I had not yet had my first mystical experiences, I was starved for the absolute, and I could not stand being stuck in rationality any longer. I read most of his books, stunned by what I found and that I had never heard of the Yaqui sorcerers and their way of life.

Castaneda is a great storyteller who helped me understand how to live like a warrior – always alert, Seeing instead of just looking. He is attentive to every detail: the wind direction, the bird that passes, the allies approaching. He is solitary and brave, he is not afraid of death and masters the art of dreaming. He is the nagual, he knows his power animal and knows how to use him when necessary. The warrior lives in the present because he has erased his past and no longer worries about the future.

Terence McKenna (1946-2000), American writer and philosopher, became known for his speculations on different topics, including the Voynich Manuscript, the origins of the human species and the novelty theory, which postulated that time and an accelerating novelty fractal wave would culminate neatly in 2012. This concept appears to draw on a mixture of hallucinogenics, Gaïaïsm and shamanism.

Terence McKenna came to me later. I had paid little attention to him until a young philosophy student with a keen intellect began attending my group discussions. An inveterate McKenna fan, he listened to his lectures, headphones on, when he slept. At that time I still swore by Leary and this gave rise to fruitful discussions. Leary the psychologist and McKenna the anthropologist form two very different schools of thoughts, but I finally allowed myself to be tempted by McKenna’s work, and I do not regret it. His universe is rich and his ideas relate to subjects that fascinate me: 2012, the Mayan calendar, the intimate connection indigenous peoples have with psychedelics, the food of the gods and its sacramental use.

McKenna demonstrates how relatively easy it is to grow magic mushrooms, even in the city, and that these mushrooms offer us access to a universal network of consciousness which is the subtle living part of the mushroom. Its physical counterpart in the mycelium, the vegetative part of the mushroom. This mycelium is composed of a set of more or less branched filaments called hyphae, which are found in the soil or the culture substrate. “When we look within ourselves with psilocybin, we discover that we do not have to look outward toward the futile promise of life that circles distant stars in order to still our cosmic loneliness. We should look within; the paths of the heart lead to nearby universes full of life and affection for humanity.”

McKenna often speaks of “machine elves,” entities some claim to encounter during psychedelic experiences, especially DMT. McKenna is a prophetic and charismatic storyteller, gleefully taking us to the strange worlds he explored. Thinking of McKenna conjures up an odd blend of the jungle, aliens, mushrooms, DMT, the spiral of time that resolved in 2012 and ethnobotany.

Alexander “Sasha” Shulgin (1925-2014) is an American chemist and pharmacologist. He is known for creating new psychoactive chemicals. His wife, Ann Shulgin (born 1931), author and therapist, worked with psychedelics such as MDMA and 2C-B in a therapeutic context when these substances were still legal. She emphasizes in her writing the potential of the Jungian psychoanalytic approach and its application in conjunction with hypnotherapy. She often speaks at conventions and continues to advocate the use of psychedelics in a therapeutic context. Alexander and Ann are the authors of the books PIHKAL: A Chemical Love Story (Phenethylamines I Have Known And Loved) and TIHKAL (Tryptamines I Have Known And Loved).

Alexander Shulgin’s secret universe was that of the mythical laboratory where he invented more than 200 psychedelics and rediscovered MDMA. He was one of the few to have a laboratory legally dedicated to the study of psychedelics in the early seventies. In his books he discusses his passion for chemistry and how he created new psychedelic molecules through trial and error. He tested them first on himself and later on an intimate group with whom he secretly shared the results of his research.

I prefer Ann’s references to psychedelic therapy sessions to Alexander’s hyper-technical descriptions. She possesses an incredibly sharp wit, and her personal experience with MDMA is rich and leads to practical applications which served me in my own experiments. She writes: “The human psyche has its own private and personal schedule for growth, and will take important steps in its own way and in its own time. The therapist is there to help the process, to devote himself, heart, soul, and insight, to guiding and supporting the hard work his client is doing. What the therapist should remember is that the client’s psyche contains a part that is a self-healer, and that it is a component of what might be called, for lack of a better term, his higher self. I prefer to call it the overseer. He should tell the client of the existence of that healer within, because by doing so, he will help activate it.”

Alexander and Ann both continued their experiments with a select group of friends while other scientists had to close their labs following the brutal prohibition of the late sixties. It took much intelligence, cunning and audacity to test Alexander’s creations in this context. But he was methodical and pragmatic and kept a keen eye on what was permissible to thwart the vigilance of the inspectors. Only after he and his wife grew too old to continue the experiments did they publish the books that become instant classics… and drew the ire of the authorities.

The sheer number of psychedelic molecules available suggest the infinite possible applications once they are made accessible to those who know how to use them. In his work, Alexander asks: “… How is it [, then] that the leaders of our society have seen fit to try to eliminate this one very important means of learning and self-discovery, this means which has been used, respected, and honored for thousands of years, in every human culture of which we have a record?”

Alex Grey (born 1953) is an American artist who specializes in spiritual and psychedelic art (or visionary art). Grey practices Vajrayana, a form of Buddhism, also called Tantric Buddhism. His work is varied and includes performance, installation, sculpture, visionary art, and painting. He is also a member of the Integral Institute. He and his wife are co-founders of the Chapel of Sacred Mirrors, a non-profit institution that promotes visionary culture in New York.

Along with Salvador Dalí’s work, Grey’s art is the one that most resembles mine. His work is a great source of inspiration. Through the wise and intelligent use of psychedelics, he manages to express subtle beauty on the physical plane, and in so doing his visions benefit others. He inspired in me the idea of devotion to art, the feeling that creation is a sacred act. Thanks to him I realized that art is my most effective spiritual practice, a form of meditation all my own.

During a period of despair due to intolerable subtle pain, Alex came to me in a dream and told me how to get out of this impasse. He suggested I play with dolphins, natural healers that they are, and to return to a basic practice including meditation, deep breathing and physical exercise. The day before, at the end of my rope and finding no one to help me, I had appealed to the world of the invisible for help and it was Alex Grey who heard my plea (without meeting physically). A subtle link unites us through the proximity of our vocation as visionary artists.

Stanislav Grof (born 1931) is a founder of transpersonal psychology and a pioneering researcher in the use of non-ordinary states of consciousness to analyze, heal and attain growth, and gain a better understanding of the human psyche. From 1956 to 1967 he researched psychedelic drugs, particularly LSD, and experimented on more than 3,000 subjects. Following the prohibition of psychedelics, he invented holotropic breathing, which can help subjects reach altered states of consciousness similar to those attained with psychedelics.

I appreciate the breadth and depth of his knowledge about the effects of psychedelics on the psyche. His clinical experiments allowed him to draw an accurate map of the states accessible while under the influence of psychedelics. This helped me integrate and understand my own experiences which lie outside the generally accepted framework of modern psychology. Regardless of their intensity, I am able to juxtapose them with those described by Grof in his books.