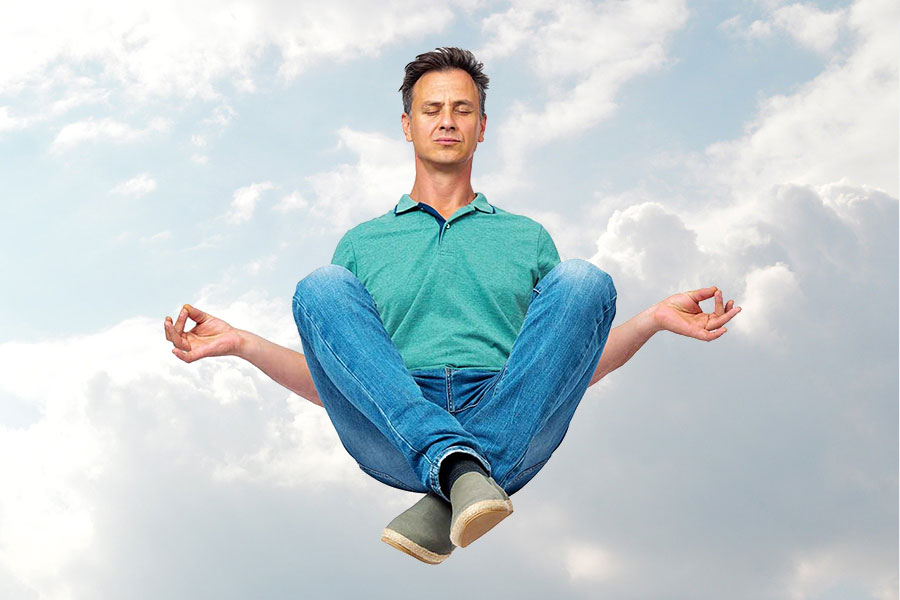 Siddhi is a Sanskrit term for spiritual power or psychic capability and literally means “perfection.” This term became known in the West through the work of H.P. Blavatsky. It originated in India, where it is believed that through certain practices, sadhus can obtain siddhis like clairvoyance, levitation, invisibility, the ability to grow, to live without eating, to walk on water, to be present in several places at once, to become as small as an atom, to physically manifest objects, to access parallel lives, and more. In the Yoga Sutras, Patanjali states that an adept spontaneously acquires siddhis as the kundalini rises along the spine and activates the chakras. He explains that these siddhis should not be sought out because they can create attachment and prevent kaivalya, deliverance. Moreover, according to Patanjali, as much as siddhis are symptomatic of the awakening spiritual state, they are in fact obstacles to Samadhi. For this reason he accords them no importance on the path to liberation. He draws attention not only to the danger of exhibiting siddhis, but to the danger they pose to the one who possesses them, insofar as the yogi is in danger of succumbing to the temptation of magic and enjoy the influence afforded him by his powers instead of devoting himself to his spiritual task.

Siddhis, however, are not the exclusive domain of yoga. Indeed, a psychonaut who consumes psychedelics a few times will soon witness his perceptions change and psychic powers begin to manifest that he would not have thought possible a few months earlier. Young hippies in the sixties rushed to India in search of gurus to reassure them of their sanity. Just imagine that, while talking to someone, you suddenly start to hear their thoughts aloud or see their future. Or imagine you are sitting in a park and a being only visible to you strikes up a conversation, or a voice speaks directly into your head. That would be enough to have you believe you had gone crazy. Westerners are generally unaware of the phenomenon of siddhis, otherwise they would acknowledge that some of those committed to mental hospitals would be considered yogis and saints in the East and indigenous cultures.

Psychedelics drew my attention to my psychic powers. They helped me develop them without falling into the trap Patanjali addresses. But I was always psychic and intuitive – I just did not realize it. It was during my first intropathy experiences that I understood the magnitude of the phenomenon. Intropathy is the act of knowing things or people in and of themselves and understanding their inherent makeup. You then realize you can hear and feel telepathically almost anyone if you remain attentive. A common occurrence with me is to think of someone and a few minutes later the phone rings. The person wants to talk, or just sent me an email.

It was after these intropathic experiences that I began to write down my dreams and call the people I was dreaming of to see if they had dreamed of me. I was very surprised at times to learn that some had not only dreamed of me, but that our dreams were in fact complementary. But we must be focused if we want to work with telepathy and other phenomena like clairvoyance, because boundaries between ourselves and others become very porous. Am I talking to myself or is someone else communicating with me? Sometimes it may just be our imagination inventing a conversation, which is why we must be careful not to fool ourselves or invoke a malicious entity.

It is beneficial to pay attention to this fundamental form of communication because soon this will be how we will all interact: freely, directly, precisely. Note that it is easier to detect telepathic signals while dreaming – there is less ambient noise, our daytime mind is disconnected and we are less critical. The state of increased receptivity in dreams allows us to see and hear another person more clearly. This state of being does not disappear upon awakening, it simply moves to the shadows for most people – the connection remains, just as clear and vivid. You only need to isolate the signal when you feel one, and not forget that dreams are alive and make this type of holographic communication intelligible.

When I think of someone out of the blue, I know this person is thinking about me. I stop everything for a moment, close my eyes, isolate the signal and allow myself to be flooded by the sensation. I can then ask that person questions, discuss, clarify some points in our relationship or simply feel that person’s state at that moment. During moments of exceptional clarity, the person’s presence is etched with his psychic signature, his voice and sometimes even his smell. At this level there are no lies, his subconscious is open and I can read him like a book. This is a good way to discover the true intentions of a person toward me, his state of being, etc. In this way it will soon be impossible to lie: the transparency of immaterialism will ultimately replace the ignorance of materialism.

The acuity of my sensitivity still surprises me… devastates me at times. I capture telepathic signals, thoughts. I hear voices. Psychedelics first drew my attention to these phenomena and now I cannot turn away from them because they render my reality intelligible, guide me, inspire me. I listen. My antennae are deployed permanently. When someone talks to me telepathically, I take note and ponder the meaning and scope of that information. I am never alone. I am permanently connected to all who love me and think of me. I feel them, observe them, even in the invisible.

We must take the time to seriously study the phenomenon of siddhis, for when spiritual powers are triggered, everyday life becomes a permanent psychedelic experience, dreams mix with waking and vice versa. This is actually healthy, but don’t tell that to ordinary people; they will think you are crazy. The danger therefore lies not in the initiation of our powers, but in beginning to perceive reality in a radically different way from those around us. You merely have to witness the terror in a person’s eyes when they experience an unexplainable occurrence in your presence to understand to what extent humans live in ignorance. They would often rather kill than be delivered. Those who rush headlong into the spider web of psychiatry rarely emerge because once trapped in psychiatric institutions it is difficult to escape.

My vocation anchors me firmly in the here and now. I NEVER lose sight of it. My powers, however potent they may be, uncompromisingly serve my devotion to this work and make my visions beneficial for the community. Siddhis should be synonymous with lucidity and a moral code, otherwise we run the risk of sacrificing our sanity or becoming a calamity – so much so that before launching headlong into the exploration of the psyche, either with psychedelics or with yoga, the conscientious psychonaut should find a way to keep his feet firmly on terra firma. Because the psychedelic experience radically activates siddhis, it can be disconcerting if we don’t have at our disposal a teacher who has experienced this type of experience, or if we are not wise enough.

LSD seems to suspend the conditioned and branded circuits of the brain that normally control perception/emotion/thought, allowing a flood – an ocean – of new information to enter.
– Robert Anton Wilson

One of the amazing powers I mentioned earlier in this chapter is intropathy, or what Timothy Leary called “imprint” with another person, dead or alive. In fact, my first experience of this kind was with Leary. I drew a profound teaching from the experience. Like an actor immersing himself in a role, I became the other, sensed reality and thought through him. This type of experience has the potential to be extremely rewarding if we know how to navigate it wisely.

I had a similar psychedelic experience with my partner. We were lying next to one another when I suddenly had the idea of putting my forehead to hers. I was pulled into her through the third eye. A spontaneous tipping took place and suddenly we were in communion. I became her while also keeping my own personality, which is a rather paradoxical condition. She left in me a rejuvenating holographic imprint because the quality of our telepathic reception was very clear. For example, when I ate a melon, she tasted the flavor as if she were eating it herself. We each had access to the memories, the sensations and the personality of the other. We had activated the We – the couple mind. We were so perfectly intertwined, we became a meta-being combining intelligence and genius, femininity and masculinity. We managed this feat and rendered it beneficial through our trust in each other.

Then I lived the same experience with my sister, who was not physically present at the scene. While I did not know Spanish, the language in which my sister thinks, I nevertheless managed to think in it. I  clearly saw memories of moments she lived with our father during her childhood and recent images of her daughter.