The 9 families of psychedelics 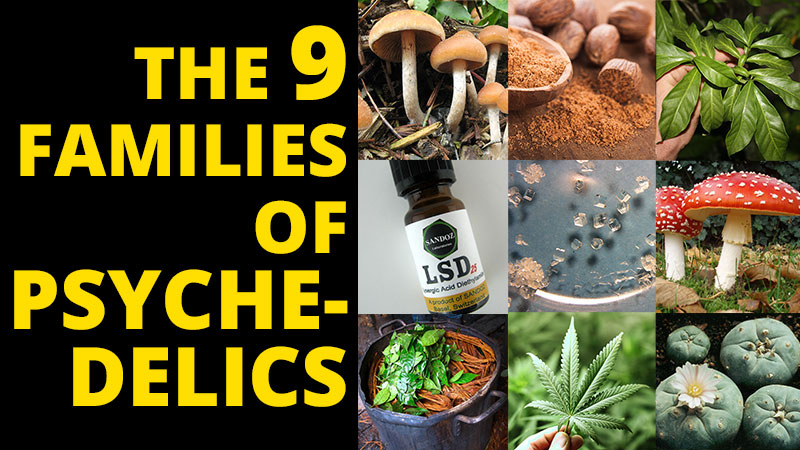 Most psychedelics can be included in one of the following nine groups of compounds:

Synthesized in 1938 for medicinal purposes by the Sandoz pharmaceutical company chemist Albert Hofmann, LSD was the principle catalyst behind the launch of the psychedelic age – its Archetype. Lysergic acid diethylamide (or N,N-diethyllysergamide) is a lysergamides family compound derived from extracts of rye ergot. It is a powerful psychotropic hallucinogen – very small doses are sufficient to cause changes in perception, mood and thought. When used to this end, it is commonly referred to as LSD, a name derived from the German Lysergesäurediethylamid.

Considered in the fifties to be the most powerful psychedelic “door openers,” peyote use in Native American ritual probably goes back more than 3000 years, and continues today among many Native peoples of North America and Central America. Peyote (Lophophora williamsii) and San Pedro (Trichocereus pachanoi) are cacti that contain several alkaloids, including mescaline, and are ingested for their psychoactive and hallucinogenic properties.

The oldest documented psychedelic group demonstrates a synergistic effect with all the others. Delta-9-tetrahydrocannabinol, THC, has psychotropic properties and is the most commonly known molecule in cannabis.

The easiest to find, they are gently persuasive, yet powerful consciousness transformers containing psilocybin and/or psilocin. Their emergence in the late seventies reintroduced an appreciation for psychedelics.

This empathic compound creates mild hallucinations and stimulates inquiry through its discrete psychedelic effects. MDA, or 3,4-methylenedioxymethamphetamine, of the phenylethylamine family, is a psychotropic substance with stimulant and hallucinogenic properties.

They vary in intensity, yet because tryptamines act on serotonin receptors in the central nervous system, they also include the most visually impressive psychedelics. The American chemist Alexander Shulgin is famous for having studied them.

Derived from the Banisteriopsis vines whose bark is the primary component of this beverage of the Amazon, these are telepathic healers. Traditionally consumed by shamans of the indigenous tribes of the Amazon, this family, and Ayahusca in particular, is known for its healing properties within the context of local beliefs and practices.

An African bush used in initiation rites and in small dose by hunters to create long-lasting peace of mind. Ibogaine, or 12-methoxyibogamine, the main psychoactive molecule extracted from the iboga plant (Iboga tabernanthe), produces vivid hallucinations.

These legendary colorful mushrooms, equal part fascinating and hellish, may have been (as the extract, Soma) at the root of the religious idea in Homo sapiens. They have been used throughout Europe and Asia in ritual and shamanic contexts. Following a special preparation, ingestion was professed to cause states of consciousness that allowed communication with the spirit world. Fly agaric contains several alkaloids, but its psychotropic character is mainly due to muscimol, an alkaloid produced during the drying of the fungus.