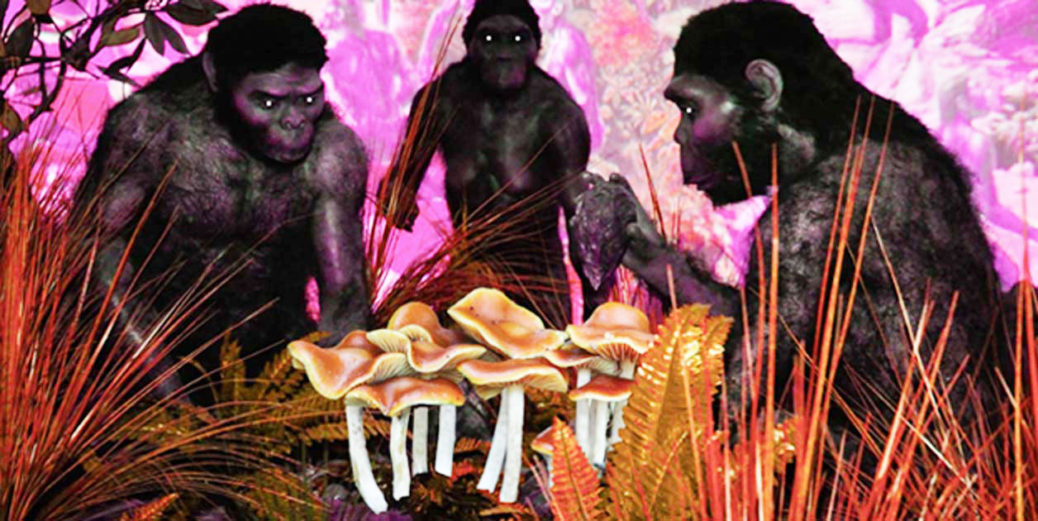 Mankind has had a symbiotic relationship with plants for thousands of years. Ethno-mycologist R. Gordon Wasson has suggested that the accidental ingestion of a hallucinogenic organism, probably a mushroom, led to the first human spiritual experience and to the creation of the concepts of divinity and the supernatural. Humanity’s relationship with psychedelics and the myths surrounding them is as ancient as it is universal. They have been described in all indigenous cultures as gods, protectors, guides, allies and teachers. From an evolutionary perspective, psychedelics have played a role in shaping human DNA for thousands of years by virtue of being incorporated in the human diet, and have thus made a unique contribution to our genetic heritage.

As early as 3500 B.C., frescoes depicting shamans dancing and holding mushrooms in the presence of white cattle were painted on rock faces in the Tassili plateau south of Algeria. Several historians have also found evidence of the use of rye ergot or psilocybin mushrooms in the Eleusinian and Dionysian rituals of ancient Greece between 1100 and 400 B.C. Mushroom-shaped stones dating from 300 to 500 B.C. were discovered in Guatemala. Frescoes dating back to 300 A.D. depicting mushrooms were discovered in Mexico, indicating the existence of psychedelic cults at that time.

In 1927, R. Gordon Wasson rediscovered the ritual use of magic mushrooms in Oaxaca in Latin America. In 1955, Wasson and Allan Richard were the first Americans to participate in a mushroom ritual under the supervision of Maria Sabina, a Mazatec healer. The subsequent publication of Wasson’s book, Mushrooms, Russia, and History, in 1957, ignited public interest in this type of ritual.

The Swiss chemist Albert Hofmann synthesized LSD-25 in 1938, and five years later discovered its psychedelic properties. He quickly distributed samples to psychologists and psychiatrists for them to study its potential in understanding and treating mental disorders.

Then, in 1966, the U.S. government, terrorized by the powerful movement triggered by psychedelics, made most of them illegal. It used all the physical, financial and political means at its disposal to spread fear and discredit the virtues of psychedelics, despite studies demonstrating their positive potential and relative safety. This repression led to the emergence of LSD and related drugs on the black market and the following years saw the birth of a liberating psychedelic movement.

In 1968, a new generation was born at Woodstock to the sounds of the Grateful Dead, Janis Joplin, Jimi Hendrix, Jefferson Airplane, Santana and many others. The Beatles released the LSD-inspired Yellow Submarine and The Doors, well, opened the doors of perception.

In contrast to this artistic revival, virtually all scientific research came to a halt. Dr. John Lilly reoriented his career to focus his research on dolphins and his invention, the isolation tank. Dr. Stanislav Grof, one of the most active LSD researchers, developed Holotropic Breathwork, a technique used to achieve a state similar to that obtained with LSD. One of the few to retain his license to produce psychedelics was Dr. Alexander Shulgin, a brilliant chemist to whom we owe the rediscovery of MDMA and the creation of more than 200 new psychedelic molecules. He was still obliged, however, to keep secret the experiments he was conducting with a group of close friends. When he became too old to continue his research, he put them in writing with his wife Ann Shulgin in their famous books, PHIKAL and THIKAL, in which he included recipes for the psychedelics he created.

We are experiencing a second wave of psychedelic research since the early nineties. Less extravagant than the hippies of the sixties, those involved in this revival are anxious not to lose their gains, so they keep their research and writings more pragmatic and constructive. The person who initiated this second wave is Dr. Rick Strassman (DMT: The Spirit Molecule), a psychiatrist at the University of New Mexico, who obtained the necessary authorization in 1990 to study the effects of dimethyl-tryptamine (DMT) on humans.

The Heffter Research Institute (HRI) and MAPS (Multidisciplinary Association for Psychedelic Studies) are non-profit research and educational organizations which help scientists obtain approval, design and finance studies on the risks and benefits of MDMA, psychedelics and marijuana.

Marc Emery, activist and president of the British Columbia Marijuana Party (BCMP), has gone to great lengths in the quest to have pot and psychedelics legalized. In addition to working at the political level, his organization launched and finances a website (www.pot.tv) which makes available free audio and video archives (news, conferences, workshops and special events, etc.). Among the many recordings available are conferences with the most important stakeholders in the field of entheogens. The BCMP also funded and helped set up the Iboga Therapy House, which uses ibogaine to help cure people of their addictions to substances like heroin, methadone, cocaine, crack, alcohol and methamphetamines.